Loading a truck and restraining that load, in theory, doesn’t seem like it would be that hard but there is an art and a science to load restraint so that it can be it as safe and risk-free as possible.

The National Transport Commission (NTC) developed a 2018 load restraint guide to help transport companies meet the load restraint requirements and performance standards. I looked into the NTC's guide, as well as some loading tips and tricks from people in the industry, to create a quick guide to load restraint.

Why do you need to restrain your load?

The number one reason for why it’s necessary to restrain your load is safety. An unrestrained load can fall from your truck and endanger pedestrians and other road users, it can move forward into the cabin and injure the driver or passenger, and it could move around and make your truck unstable.

Legally you have to restrain your load. Load restraint laws require you to meet a certain standard when restraining your load. Failure to meet this standard will result in penalties, fines, and perhaps even worse if someone gets hurt as a result.

Everyone within the supply chain is responsible for meeting compliance. According to Chain of Responsibility laws, every is not only responsible but liable if a safety breach occurs due to poor load restraint – so it’s best to know how to restrain your load, and make sure everyone else knows too!

What load restraint requirements do you need to meet?

There are two main requirements that you need to know to meet compliance with load restraint:

The tie-down method uses a clamp like force and friction to keep your load from moving. As shown in the diagram below, you tie down your load with lashings, the amount of lashings you’ll need will depend on the size and weight of your load. Your lashings must be tensioned so that, to meet requirements, 20% of your load weight can be restrained in an upward direction – this is to prevent your load from jumping up and coming loose while in transit. 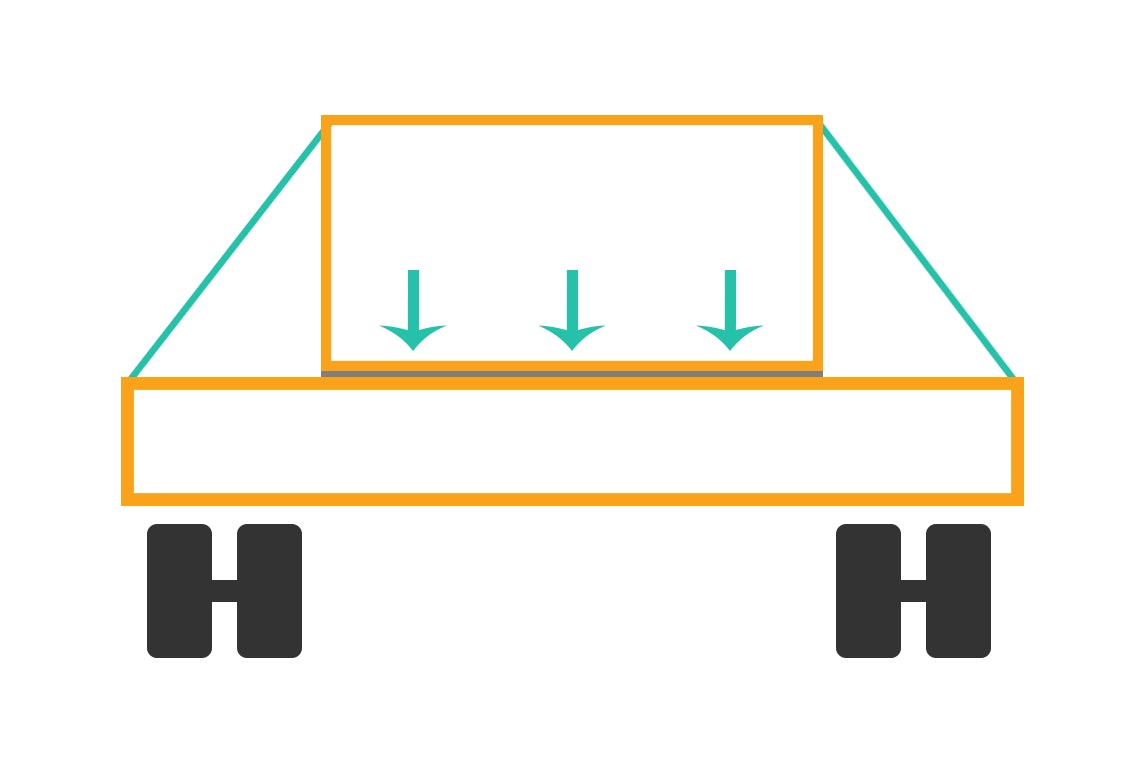 Loads that this restraint method won’t work for:

This is when you attach you load directly onto your vehicle. This method can be used for pretty much all loads, but is especially useful for slippery loads or loads with wheels. There are three ways you can directly restrain your load:

Steps for restraining a load

You should know the dimensions, weight, centre of gravity and other characteristics before you start loading it.

2. Pick the right vehicle for your load

If you have a vehicle that’s too small, your load may affect your braking, steering and acceleration, and you risk making your truck unstable, increasing the likelihood of it tipping over. If it’s too big, well I don’t think there’s anything against having a truck that’s too big, but if you don’t have to take a B-double, why would you?

The type of load you’re transporting will determine what load restraint system will be most effective and sometimes will require a combination of systems to meet compliance.

This is safety tip number 1, but make sure you know how to load and unload your truck safely.

You want to make sure when loading your truck that you’re not causing it to become unstable. To position your load right, keep these things in mind:

This is pretty standard for all equipment that you use, but before you start restraining your load, make sure your lashings, chains, rope, or whatever else is in good enough condition to be able to secure your load.

7. Make sure your load is stable

Place your load against something rigid and fixed so that it won’t tip or move with heavy braking or turning. To help with stability, make sure that:

Check to ensure that the restraints that you are using are adequate to restrain the weight and size of your load and meets the restraint standards.

9. Be aware while driving that your load is likely to affect your vehicles braking, acceleration, and steering

With a load your truck becomes heavier and thats going to have an effect on how it drives. Be aware of that and taking into account how fast you can safely drive, the possibility of braking delays, change in height of your vehicle, and any effects on your trucks stability.

10. Check your load throughout your trip

Make sure that you check your load regularly while on your trip to make sure that it is still properly restrained.

This doesn't need to be every ten minutes, but especially if you're on a long haul, checking your restraints every time you go take a break could allow you to pick up on anything that's wrong before it actually goes wrong.

Tess is a design savant, fashion leader and a pretty darn good writer. Whether it’s creating digital designs, blogging about learning science or rocking a neck-scarf, Tess can pull it off.