Perhaps you’ve heard more lately in your newsfeeds about the imminent arrival of Augmented Reality (AR) and Virtual Reality (VR) into everyday life.

But what are these technologies? Why are we hearing more about them now? What do they mean for Workplace Learning? And when are they really going to arrive?  — 4 questions I think about regularly! 🤔

First up: What are AR and VR again?

Yeah, a short refresher is a good idea:

Why so much noise lately about AR and VR?

The very robust (and often accurate) industry of technology rumours indicate that Apple is likely to launch some sort of mixed-reality headset in the near future.

And it’s a simple fact these days that Apple leads technology trends.

So what does AR/VR/Mixed Reality mean for workplace learning?

Here’s where it gets interesting:

VR and Training – Failure without consequence

There’s a clear and obvious first application of Virtual Reality for training. But explaining it requires a little context.

This has lead to training design that walks workers through a simulation of a real-world situation, and asks them to make choices based on the information at hand.

For organisations that have embraced this approach the benefits seem clear.  But to date, the degree of interactivity for these scenarios has ranged from written stories — think Choose Your Own Adventure  — to mostly less-than-impressive third-rate video games.

The deeply immersive nature of VR environments, though, portend scenario designs that don’t simply create an academic, top-line version of a real-life scenario, but rather viscerally immersive scenarios that plunge the learner’s senses into complex heart-palpitating experiences. The better the simulation the deeper the learning.

AR and Training – The ultimate job-aid

Augmented Reality is arguably more interesting than Virtual Reality because it’s both closer to being reality, but also more accessible, ambiguous and versatile in its application. So I’ll focus on one application that’s already a reality.

One of the first steps in training design is to ask if the problem can best be solved by providing the learner a just-in-time resource to consult in specific contexts to achieve a task correctly — as opposed to trying to have them memorise everything that must be known about a task (the traditional approach). We call these just-in-time resources, “job aids”.

So imagine this: a pair of glasses that can recognise the task you’re doing and provide you resources and information directly in your field of vision to help make sure you do the task well/correctly.

It’s not science fiction. It’s science reality. Although Apple’s influence will likely be what pushes this mainstream, Microsoft’s HoloLens has been empowering technical field service roles for years — specifically vehicle and elevator repair, amongst others.

So when’s this future likely to arrive?

The truth is that AR/VR application in workplace learning is already here, as evidenced above. But it’s still the realm of niche “innovators”.

And though 2020 and 2021 have seen a big increase in rumour activity around AR and VR it doesn’t seem likely that Apple will be releasing a new product before 2022. But that doesn’t mean they won’t announce a new product this year.

So, IF Apple’s entry into AR/VR is the catalyst for wide adoption, and IF we  can use the introduction of the iPhone as a time marker for mainstream adoption of smartphones,  it will take about 7 years for these technologies to become common in half of workplaces. But if you ask me, it will happen much quicker.

In the meantime, we in the L&D game have some things to figure out. The two questions top of my mind are:

The answers to these questions are still ambiguous. But the future is inevitable. And I look forward to discovering how Yarno will play in this space. 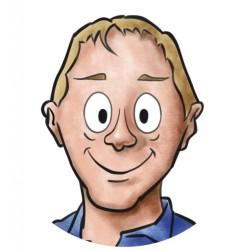 Joel heads up the Content team at Yarno. He’s our culture sensei, resident philosopher and Apple power user extraordinaire. Oh, and he writes some pretty mean questions too.

2020 brought a new emphasis on learning; a bright patch in that otherwise dark, dreary year.